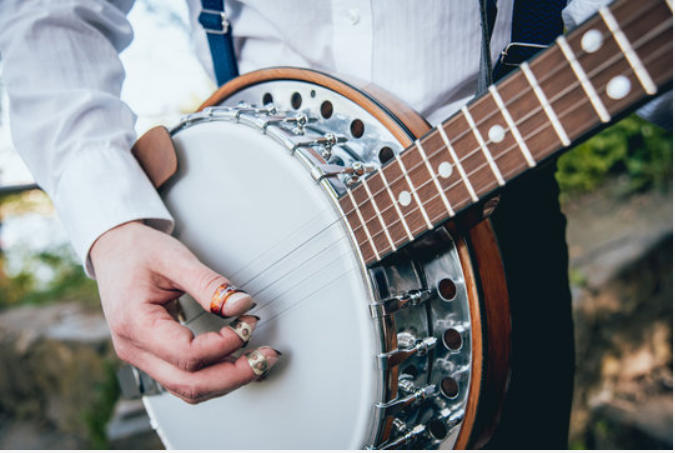 The banjo has a body similar to a tambourine with four or five strings. The strings cross above a pressure bridge and are attached to a tailpiece. These vibrate and also cause the stretched animal hide or plastic membrane to vibrate.

Some believe that the name banjo came from the Portuguese word bandore or a Spanish word bandurria. A few say that it may have been derived from a Senegambian word that refers to a bamboo stick that was originally used for the banjo’s neck structure.

The creation of the banjo can be traced back centuries. The origin of the very first versions of the banjo is indefinite. In the Mideast, Far East and Africa, it was common to see strings stretched across drums made of animal hide.

The first written citation of a banjo-like instrument is credited to Richard Jobson, an explorer. He mentioned it in the diaries or records of his journey in the Gambra River of Africa in the 1620. Minstrels in Virginia used two banjo players in a show in 1843. This started the spread of banjo’s popularity in the United States.

In the early 19th century, the five-string banjo was invented by Joel Walker Sweeney. He brought in the instrument to Great Britain during his tour in 1843. The banjo gained its name as an accompaniment of United States’ music during the First World War.

There are three major types of four-string banjos – plectrum banjo, tenor banjo, and cello banjo. The plectrum banjo is just like the regular banjo but it does not have a short drone string. It is typically played with a pick similar to that of the guitar.

The tenor banjo has a shorter neck than the plectrum banjo. It became popular and had seventeen frets and a length of nineteen to twenty-one inches around 1910. In the middle of the 1920’s, the tenor had 19 frets and was twenty-two to twenty-three inches long.

The rarest type is the cello banjo. It has the same range as the mandocello and cello and is tuned one octave lower than the tenor banjo.

An American minstrel player from Virginia named Joel Walker Sweeney made the five-string banjo popular in the 1830’s. He was the first American who played the banjo in front of an audience.

The five-string banjo’s fifth and first strings have the same gauge but the fifth is five frets shorter. This causes difficulties in adjusting the pitch using a capo. A lot of banjo players prefers to use titanium or model railroad spikes to keep the string pushed down on the fret.

There many variations of the modern banjo. Increasing its popularity is the six-string banjo which is played like a guitar.

The modern banjo’s body, sometimes referred to as pot, has a metal ring, circular wooden rim, and a stretched head. The head is made of animal hide but could also be made of synthetic materials nowadays.

Electric banjos could also be seen in the modern day’s market.