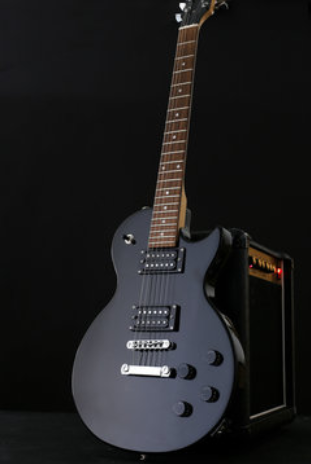 The bass guitar, sometimes called bass or electric bass, is a stringed instrument which has a design similar to the guitar. The difference is that it has a longer scale and it is tuned in a deeper pitch. It is primarily played with the fingers or with a plectrum or pick.

It also has the same construction and appearance as an electric guitar but it has a longer neck, a larger body, and a longer scale length. The bass guitar could be fretless or fretted but fretted basses are more commonly used. It could either be acoustic bass or electric bass.

The first electric string bass that is also similar to the modern bass was invented by Paul Tutmarc of Washington around 1930. It was a fretted instrument which was constructed to be played horizontally. In the 1940’s, Bud Tutmarc, son of Paul Tutmarc, marketed the bass guitar under the brand name Serenader and advertised it nationwide. Unfortunately, the Tutmarc’s bass guitar did not become popular in the market.

At the time of 1950’s, the first electric bass, called Fender Precision Bass, that was in mass production was created by Leo Fender. Its body design was contoured and its edges were beveled. In 1953, the Gibson Guitar Corporation put the electric bass with a violin shape and an expandable end pin on market. These had one humbucker right alongside the neck pocket.

Rickenbacker released the model 4000 bass which had a neck-through-body design in 1957. High end bass guitars which have unique designs, onboard electronics, and hand-finished bodies rose in the 1970’s. In the 1980’s, the headless bass wad developed by Ned Steinberger and the Guild Guitar Corporation introduced the use of silicone rubber strings. Recently, bass guitar producers added digital modeling circuits in the instrument.

Electric bass guitars has lasted for over 70 years and counting. It has grown to be an essential element in modern music. In the years that have passed, the bass guitar’s design had many design changes. Here are a few classic bass guitars.

The Hofner was played by Paul McCartney although not expensive or outstandingly made. The Fender Jazz started in 1960 with a slimmer shaped neck and two pickups while the Fender Precision was introduced in 1951 with a slab body and one pickup.

The Musicman Stingray arrived in the 1970’s with a humbucker bass pickup while the Gibson Thuderbird came on scene in the 1960’s. The Rickenbacker 4001 came in the early 1950’s and it became the rock bass chosen by many.

How to play
If you are still learning to play the guitar, it is best to use a fretted bass guitar because it is easier to accurately hit the notes. First, you need to put your fingers into practice. Relax the hand with which you will play the bass guitar and lift it at an angle of 90 degrees. Lift your fingers one at a time in rapid succession.

After that, place the bass guitar on your thigh with the strings away from you. Place your thumb on the E string and the middle and index fingers on the D string. The E string is in the middle of the strings and the D string is two strings down the former. Pluck these consecutively until you are comfortable and accustomed to it. It is easier to start learning one song at a time. Choose a song that requires mostly the basic chords.