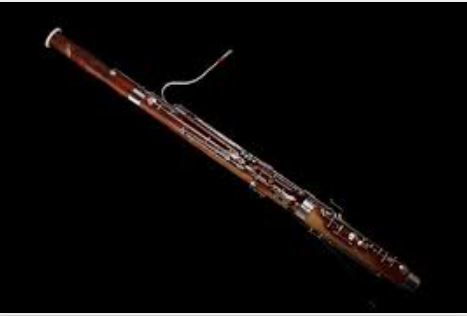 The bassoon is a double-reed instrument in the woodwind family. Music written in tenor and brass registers is suitable for the bassoon. It is an instrument with a history of greater than four centuries. Together with the flute, oboe, English horn, clarinet, and contrabassoon, it covers the role of the bass and tenor instrument of the orchestra.

The 16th century ancestor of the bassoon was given many names: fagot for the French, dulcian for the Germans, bajon for the Spanish, curtal for the English, and fagotto for the Italians. This was not made of four separate sections like in the modern bassoon but was made of only one piece of wood.

In the 1700’s, there were six varieties of curtal based on length. The French later on developed into a four-piece musical instrument. During the time of Mozart, it had six keys but, during Hayden’s, the 17 to 24 key versions arose.

It elevated its status in the orchestra during the 18th century wherein orchestral and major solo music was made for it. Bassoons for military bands, tenoroons, and sub contrabassoons were created in the 19th century. It was released from the curse of playing the continuo part. Nowadays, it is played in opera, symphony orchestra, and in contemporary musicals.

There are six major pieces of the bassoon. The bell extends upward. The tenor joint connects the bell and the boot which is at the bottom of the instrument. Fourth is the wing joint which is from boot to crook in length while fifth is the crook, a metal tube that joins the reed and wing joint. And last but certainly not the least is the reed.

Bassoons today are commonly made of pearwood or maple such as sugar maple and sycamore maple. If you prefer less expensive ones, you can also have those that are made of ebonite or polypropylene which are usually for the outdoors and beginner’s use.

Two bassoons are typically required in today’s symphony orchestra with the first used in solo passages. It is also a valuable bass in the woodwind choirs.

Here are the basics of playing the bassoon. It is diagonally held in front. Regrettably, it cannot be propped up by the hands of the player alone. A seat strap or a neck strap is required to play it to give additional support.

It is played with the left hand above the right hand. There are 5 major finger holes at the front and one open-standing key. The little fingers handle five added keys at the front while the thumb manipulates no less than twelve keys at the back. Many bassoonist use a crutch to support the right hand. It makes it easier to flatten the finger pads against the keys and finger holes.