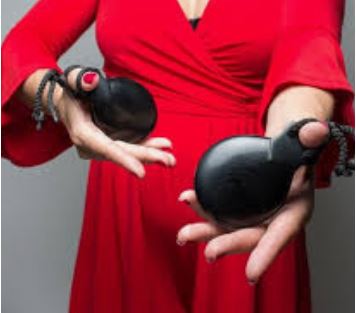 The castanets, also referred to as palillos, are probably the most sophisticated percussion instruments. It is used in Portuguese, Italian, Moorish, Spanish, Latin American, and Ottoman music. It is generally a pair of concave shells connected at an edge by a string. These are hand-held and produce clicking or rattling sounds used for rhythmic accents.

Castanets are also played in the orchestra. At times, these are fastened to the handle or placed on a base forming machine castanets. Playing the castanet in the Spanish style is very rare in the modern orchestra. This is not because it is very complex to master and apply but because there are no more than four known professional castanet players all over the world. To compensate for this, a castanet machine is used. The cups of a castanet machine are attached to a piece of wood which ends in a handle that is held and shaken.

There is no known definite origin of the castanets. The method of clicking sticks together using one hand to be music for dancing is certainly ancient and has been done by the Egyptians and the Greeks.

However, there are theories on its development. One is that castanets are the descendants of the Iberian crusmata which were two shells, wooden sticks, or flat stones. Also, the Greeks played the krotola in religious affairs but it is proven that castanets were also found in Italian, Latin, and Portuguese music among many others.

Use of the Castanets

Castanets are dominant in music for dances in the baroque period. These were score for dancing music by composers such as Jean-Baptiste Lully. They were also often used for dances about unpleasant ideas such as nightmares or demons. It was also mentioned in the Lully’s ballet Flore in 1669 that castanets were also used for African Dances.

Castanets were played to evoke or give out a Spanish aura in many works such as in Carmen by Georges Bizet and España by Emmanual Chabrier. They were also included in the opera of Richard Strauss entitled Salome specifically in the Dance of the Seven Veils.

It was given a solo by a few musicians such as Helmut Timpelan, a German composer, and José de Udaeta, a castanet maestro.

Traditionally, a castanet player holds one set of castanets on each hand. Flowing with the music and providing syncopation, these are hit together. The fingers manipulate the upper shell while the palm holds the lower shell. When castanets are played with a couple, they symbolize male and female and every set has a particular male or female given name. The female castanet is called hembra and is smaller than the male counterpart named macho. The macho is held in the left hand while the hembra is held in the right. The pair’s difference in size also gives a difference in pitch.

Castanets could be connected to the thumbs which is common in folk music or to all of the fingers which is expected in classical music. The placement of the castanets may vary depending on the music genre.

A skilled castanet player has very swift movements with castanets which produce great rhythm counterpoint for dancing like the Flamenco dance or for accompanying other instruments.

A set of castanets looks similar to two small chestnut shells or clamshells. Actually, the term castanet is derived from the Spanish word castanuelas which means little chestnuts. These are either made of fiberglass or wood. The two shells are held together by a thin rope or string that is sometimes made of animal skin or leather.

Music Instruments, what they are, why they matter and where’d they go?