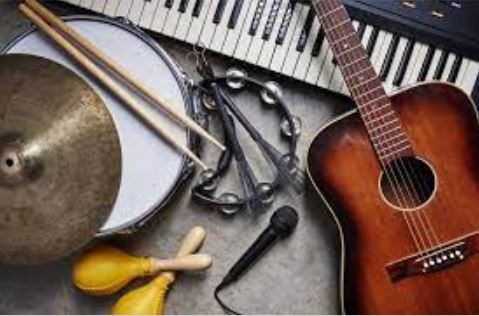 Music Instruments are grouped by different but related sizes or types. These groups of instruments are referred to as a family. Basic families include Strings, Keys, Percussion, Woodwind, and Brass. The following is a brief overview of each family as well as examples of instruments within.

String instruments, stringed instruments, or chordophones are musical instruments that produce sound from vibrating strings when the performer plays or sounds the strings in some manner.

With bowed instruments, the player pulls a rosined horsehair bow across the strings, causing them to vibrate. With a hurdy-gurdy, the musician cranks a wheel whose rosined edge touches the strings.

Bowed instruments include the string section instruments of the Classical music orchestra (violin, viola, cello and double bass) and a number of other instruments (e.g., viols and gambas used in early music from the Baroque music era and fiddles used in many types of folk music). All of the bowed string instruments can also be plucked with the fingers, a technique called “pizzicato”. A wide variety of techniques are used to sound notes on the electric guitar, including plucking with the fingernails or a plectrum, strumming and even “tapping” on the fingerboard and using feedback from a loud, distorted guitar amplifier to produce a sustained sound. Some types of string instrument are mainly plucked, such as the harp and the electric bass. In the Hornbostel-Sachs scheme of musical instrument classification, used in organology, string instruments are called chordophones. Other examples include the sitar, rebab, banjo, mandolin, ukulele, and bouzouki.

Today, the term keyboard often refers to keyboard-style synthesizers. Under the fingers of a sensitive performer, the keyboard may also be used to control dynamics, phrasing, shading, articulation, and other elements of expression—depending on the design and inherent capabilities of the instrument.

Another important use of the word keyboard is in historical musicology, where it means an instrument whose identity cannot be firmly established. Particularly in the 18th century, the harpsichord, the clavichord, and the early piano were in competition, and the same piece might be played on more than one. Hence, in a phrase such as “Mozart excelled as a keyboard player,” the word keyboard is typically all-inclusive.

A brass instrument is a musical instrument that produces sound by sympathetic vibration of air in a tubular resonator in sympathy with the vibration of the player’s lips. Brass instruments are also called labrosones[1] or labrophones, from Latin and Greek elements meaning ‘lip’ and ‘sound’.

There are several factors involved in producing different pitches on a brass instrument. Slides, valves, crooks (though they are rarely used today), or keys are used to change vibratory length of tubing, thus changing the available harmonic series, while the player’s embouchure, lip tension and air flow serve to select the specific harmonic produced from the available series.

The view of most scholars (see organology) is that the term “brass instrument” should be defined by the way the sound is made, as above, and not by whether the instrument is actually made of brass. Thus one finds brass instruments made of wood, like the alphorn, the cornett, the serpent and the didgeridoo, while some woodwind instruments are made of brass, like the saxophone.

Percussion Keeping The Beat In Music!

Accordion To Me, It is a Heavy Instrument! The Accordion is one of the First Sound Makers – or Musical Instruments!